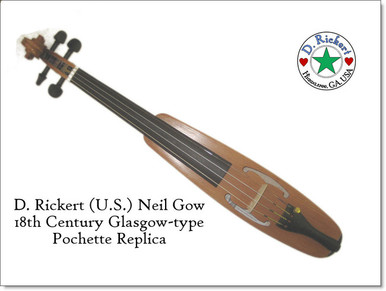 WANT TO PLAY A POCKET FIDDLE (aka Kit Fiddle or Pochette) LIKE THE ONE THAT NEIL GOW (one of the founding fathers of Scottish fiddling) played. THOMAS JEFFERSON often played a fiddle of this type as well (yup, the President was a fiddler as well).

You need look no further. We now make in our Hiawassee, GA lutherie a pochette based on the one in the Burrell Museum in Glasgow, Scotland...; which has become one of our most popular instruments.

Unlike the purely Baroque Glasgow Pochette, the Neil Gow is based on a high-end 1770s-1780s instrument. It has a bass bar and a sound post. It is strung with period gut strings by Gamut. Its sound is sonorous and sweet, with good mid and low frequency overtones for such a small instrument. Please see the video that accompanies this product listing to here how it sounds and see one way of playing it. It would have generally be played resting on the left arm rather than under the chin as in the video.

Period (18th Century) wooden and genuine leather cases (like the one Thomas Jefferson used) are available for this instrument, which, in addition to being charming and beautiful, sounds wonderful. The cases are rather expensive. A much less expensive option would be a regular modern travel violin case (see the CASES category). We are working on plausible looking faux wood and leather covered tubular cases, both of which look very much like the historic Thomas Jefferson case. If you are interested in one of these less expensive cases, indicate your interest in the "Special Instructions" field to the right.

Typical of the many comments we recieve on the Neil Gow pochette's sound is the one below, which was posted on YouTube.

Wow - that sounds? great ! To my understanding, this size/style of instrument usually doesn't have much of a bass response - but this one does. Some luthier magic there (and a good player too) !

Our Neil Gow Pochette is designed to be played baroque style (tucked in the arm pit, resting on the forearm); however, the instrument can be played under the chin in a "transitional style". Either a baroque bow or a modern bow is historically appropriate, as both types were being used in the late 1700s.

This is also known as the 'Neil Gow Pochette'. This is a higher-quality version of an earlier video. Expert playing of this 1780s Dancing Master's Kit fiddle or pochette (pocket fiddle) by Darci Jones. Thomas Jefferson is also believed to have owned and played a pochette similar to the original from Glasgow, Scotland, which our instrument replicates. Note: Darci is playing in the "transitional" under-the-chin style rather than the on-the-arm Baroque style...either is historically correct. Available from www.AdventurousMuseStore.com or the Adventurous Muse by Don Rickert Design storefront on www.Amazon.com