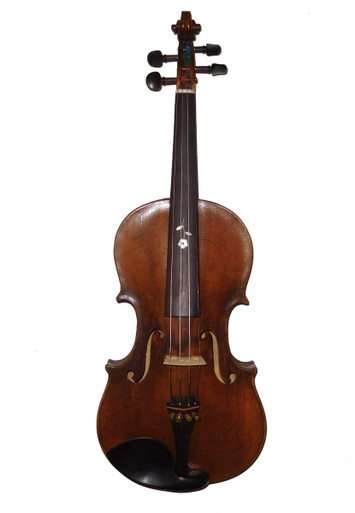 This is a well-worn fiddle bearing a fake Stradivari label dated 1713. The labeling is consistent with instruments coming out of Bohemia (now the Czech Republic) in the early 20th Century. The common practice of the time was to subtract 200 years from the actual date of construction. So a label date of 1713 would actually indicate 1913. The part of the label that presumably would have declared the actual provenance, as required by U.S. importation law in effect since the late 19th Century, is worn (or, more likely, deliberately rubbed) away. When we used to vend at a lot of fiddlers' conventions, we would see many fiddles like this one, whose owners were often insistent (deluded) in their belief that they possessed actual undiscoverd Stradivaris.

The fiddle is quite structurally sound. It has NO active cracks and several expertly-repaired cracks. The instrument bears what a appear to be deliberate distress marks on its back. The dark varnish appears to be asphaltum. It is possible that, at some point, the fiddle was re-varnished. The nut appears to be real ivory.

The fiddle plays nicely and sounds pretty good. This is an excellent instrument for the fiddler seeking a century-old fiddle in good playing order.

No bow. We do have what looks to be the original case.