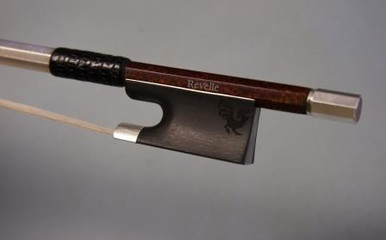 This bow contains no elephant ivory, fossil ivory, tortoiseshell, real lizard skin, controlled abalone shell (e.g. Black Abalone or White Abalone) or products from other controlled species. You will be able to travel across international borders without risk of unintentionally violating U.S. or International laws relating to endangered species.

Woody - For advanced players looking for a wooden bow appearance but durability and resistance to humidity of carbon fiber. Similar to playing performance of the Phoenix with 100% carbon fiber fabric core and logwood skin (made from “logwood”, a wood similar to Brazilian Pernambuco, from Mexico and Central America).

This is a really cool bow for intermediate to advanced players, violinists as well as fiddlers. It is a braided carbon fiber bow that looks EXACTLY like a pernambuco bow. This will appeal to the traditionally minded violinist as well as many fiddlers, who would not be caught dead with a new-fangled carbon fiber bow.

The Revelle Woody bow has a “skin” derived from a close relative of pernambuco wood, known as logwood (aka bloodwood), fused to it. The bow has a finish that looks like varnished pernambuco, as it were.

Now what is logwood, you may ask. The simple answer is that it is from a tree whose heartwood is visually indistinguishable from the heartwood of the pau-brazil (Caesalpinia echinata) tree, which we know as pernambuco. While both woods have been used to make red dye for centuries, only the pernambuco wood has been used for bow making. Oh, the botanical name for logwood is Haematoxylum campechianum.

Both pau-brazil (pernambuco) and logwood are flowering trees in the legume family. Yes, both of these trees produce peas. Pau-brazil is found only in Brazil and logwood is found Southern Mexico and Central America.

The point of all this is that, while the bow looks like pernambuco, none of the highly endangered wood is used in the making it.

How does it play?