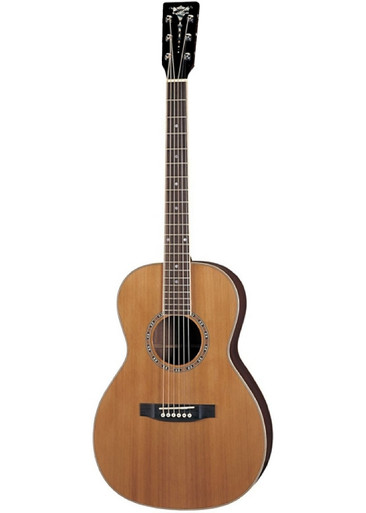 This custom guitar is inspired by one of the types of guitars being introduced during the birth of American Old-Time music. At that point in time, many guitars were fit with more or less modern open-gear tuners. This one has the banjo type tuners used on several Martin models, from the teens until the early 1930s.

The base instrument is highly modified by D. Rickert Musical Instruments. These modifications include completely reworking the head stock for banjo type tuners. Our creation

This is a replica inspired by the Martin OM body and some OOO body guitars of the early 20th Century, particularly the OM45, OM28 and OOO-28, all of which had banjo type tuning pegs. This is the ultimate guitar for Old-Time music, as defined by such groups as the Skillet Lickers. This is a much cooler instrument than one with standard open gear machine heads.

While these guitars can be played finger style, they would more likely have been played with a pick as an accompaniment instrument to one or more fiddles. Finger style playing just does not cut it for such use. The flat pick is essential for achieving the volume necessary for laying down the rhythm for the fiddles (the fiddlers had to hear what you were playing).

The most suitable strings are La Bella silk-and-steel or phosphor bronze. Note: La Bella was one of the first makers of the steel core strings being used in the early 1900s. They still make strings today and are a favorite of many Old-Time style guitarists.

Generally, the best you are going to do for an OM sized guitar like this one is a cloth gig bag.

It was not easy, but we found a source for the right case. Keep in mind that our case is a modern hard shell case. If you want a period case, you would commission us or someone else to make an appropriate case. Images of an Actual Martin OM28, and OM28 and OM45 Headstocks